I’ve been following the Social Media Release story on Techmeme (the home of social media releases via blogs). This is my area and I have a big opinion. For the past 4 years I’ve been at the center of social media, social networks, social graphs,,bla bla bla. Social Media is the real deal. Here are some of my opinions that I’ve posted here before. Social Everything. Social Media New Standard for Online Advertising. Vertical Media New Online Advertising Model. Are Ad Agencies Dying?

Matthew Ingram breaks this down for the average Joe and Mary – put freakin links in your releases. Thanks Matthew.

Seriously Mr. Ingram is right on, and I’ll go on to say that SMNR are a good thing . Press releases have to change and are changing. Companies like Cisco and Intel are doing it right. Other leaders are moving in the social media direction as well.

Two big problems with the above examples: 1) It’s just not about PR any more it’s about message distribution and rich media – hello integrated marketing and advertising groups – It’s not just PR anymore; 2) most of the examples mentioned above particularly Cisco are flawed in that their media isn’t social. Putting links in a release doesn’t make it social. Cisco is putting in links but the content is all about their walled garden site – that ain’t social that’s ‘jail’.

My Take: PR is now an integrated process that has it’s own value chain. It’s not about throwing a release out over the wall and it’s over. It’s a recursive process that requires resources both people and machines. This is where Tom Foremski is so brilliant. He has always talked about machine media working in tandem with people – thats social and that’s social media.

My advice: produce media in the Social Media Release and make it social. Sometimes that will require resources (people and money). This has been the biggest issue for PR departments – they are underfunded for this activity yet it is becoming a critical success factor for their business. The lines between PR and online advertising is bluring. 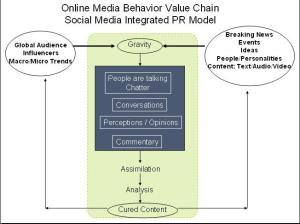 Thanks to Tom Foremski for starting this conversation. Here is a picture of me Tom and one of the fathers of blogging Doc Searls. Social Media Releases are the future of PR – now they just need to be social.

9 thoughts on “Social Media Release – Needs To Be Social”

Unique Site Visitors (this year) not including RSS Feeds