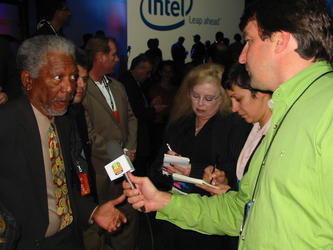 Ginni when she took over, sorry, she was running strategy before she became CEO, I mean, IBM had a choice, they could go double down on infrastructure and go knock it out with Dell and EMC and HP, or they could go up the value chain. And my ongoing joke is Dell bought EMC, IBM buys some other company, and that to me underscores the differentiation in thinking. Oracle, I think, is a little different, but Oracle and IBM are somewhat similar, I think you’d agree, in that they’ve got a big SaaS portfolio, they’re trying to vertically integrate, they’re trying to drive high-value margin businesses. The difference is IBM’s much more services oriented than, say, an Oracle, and that’s still, as I say, a big challenge for IBM. But I’m more, I’m a bull on IBM.

IBM’s model of open source is very clear. If you look at what they’ve done with just Blockchain as a great example, they have mobilized their company, and they did it with Bluemix as well with the cloud, once they said, “We want to get in the cloud game,” once, “We want to do Blockchain,” they go open source at the core, then they get their entire brain trust workin’ on it. It’s not just a hand wave, some division, they’re kind of reorganizing on the fly, they’re kind of agile organization, which some may read as chaotic, but to me, I think that’s just good management practice in this day and age. They get an open source project, and they drive that home, and they have people contributing and giving that to the community, and then adding value on top and differentiating. It’s just classic 101, create some value, and create some differentiation with your products, and by the way, if you don’t want to use our products, build your own, or hey, use the open source code. That’s pretty much an over-simplified version of open source.

Unique Site Visitors (this year) not including RSS Feeds